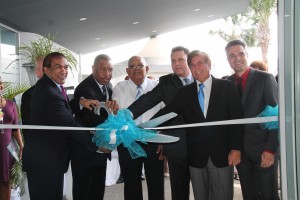 WILLEMSTAD – During the Grand Opening of Jet Centre Curaçao, CEO of Curaçao Airport Partners Ralph Blanchard expressed his gratitude to every person, company and organization that collaborated and cooperated in order for the Jet Centre Curaçao to have become a reality today. During the ceremony, Ralph Blanchard on behalf of CAP, surprised Captain Gibbs (CATS) with a plaque of recognition that will be displayed at Jet Centre Curaçao and joined by Minister Palm (Economic Development), Minister Navarro (Justice), Minister Jardim (Finance) and Minister van der Horst (Government Management, Planning and Public Service), they inaugurated the VIP facility for private planes.

“I’m extremely happy with the opening of Jet Centre Curaçao, a beautiful modern building that offers our visitors traveling by private jet a luxurious and private area that offers first class service. Jet Centre Curaçao will surely be a boost for Curaçao with regard to the function as a hub for private jets, but also in order for us to attract more visitors as tourists. Congratulations to Curaçao Airport Partners and to the people of Curaçao”, were the words of Minister Stanley Palm (Ministry of Economic Development) during his speech at the Grand Opening. A large number of invitees and press witnessed the official inauguration of Jet Centre Curaçao, followed by a tour of the building which gave them a better impression of the VIP service that is now being offered in Curaçao. During his speech CEO of CAP, Mr. Ralph Blanchard, explained the importance of the Jet Centre for Curaçao: “Being a part of this segment of the industry is another way that we can continue to credibly expand the Curaçao Air Market and Aviation System. Building and inaugurating the JCC is just the beginning. Now our job is to optimize the exposure of Curaçao in the General Aviation world, and deliver, along with our partners, the best and most competitive services we possibly can. It’s important to capture this segment. These are high profile, high net-worth, travelers that can have a powerful economic impact on Curaçao, and, if serviced properly, can help boost recognition of Curacao in high economic circles”, according to CEO Ralph Blanchard.

Recognition Captain Gibbs
CEO Ralph Blanchard also put the emphasis on the importance of the collaboration amongst all partners in order to jointly achieve a successful service. “Many have contributed to the implementation of Jet Centre Curaçao and I believe that it is important to recognize their efforts”, Blanchard indicated. During his speech he thanked Minister Palm for his support of the efforts of CAP, Minister Navarro and his team from Immigration, Minister Jardim and his team from Customs, Minister van der Horst for his support, The Board of Directors of CAP (represented by Mr. Eric Krull during the event) who funded and supported the efforts of CAP, Maurice Adrieans of Curaçao Airport Holding who has been supportive of the General Aviation initiative, Curoil, CATS, and the CAP and Jet Centre Curaçao team that operate the facility.

Jet Centre Curaçao already a member of the ‘Air Elite’
Jet Centre Curaçao also already received international recognition: “As the result of a recent visit by representatives of World Fuel, the largest wholesaler of Aviation fuel in the world, Jet Centre Curaçao was accepted for membership into the prestigious ‘Air Elite’ FBO program. This within 1 month of operation”, CAP CEO Ralph Blanchard explained, “Out of thousands of World Fuel affiliated FBOs worldwide, there are only 35 that are in the ‘Air Elite’ category. Jet Centre Curaçao is now also operating under this exclusive banner. This provides us with an extensive marketing platform through which to expose Jet Centre Curaçao and Curaçao to the worldwide corporate travel marketplace”, Ralph Blanchard continues, “We are also members of the National Business Aviation Association (NBAA) and next week we will be participating in the ‘NBAA Schedulers and Dispatchers Expo’ with a booth in the World Fuel section, which will be excellent exposure for Curaçao”.

$1.2 million investment
The Jet Centre is Curaçao’s very first dedicated terminal that offers a segmented group travelling to and from Curaçao by private or corporate plane, a more luxurious comfortable travelling experience. The modern facility offers exclusive services such as Immigration, Customs, General Aviation, fuel services, security, state of the art meeting room facilities, facilities for pilots and much more. Currently Curaçao handles approximately 3300 corporate or private planes at Curaçao International Airport, but now with services offered through the JCC, Curaçao will be able to attract many more clients. Curaçao Airport Partners invested $1.200.000 in the development of Jet Centre Curaçao.

For more pictures of the event, visit our Facebook page.